In his project overview, Robert Blenker, CEO of WRB Energy and Content Solar, praised the ease of doing business in Jamaica, highlighting the skill and efficiency of workers and technical personnel. Mr. Blenker noted that at each step of the process, “people did what they were supposed to do and did what they said they would do …. and I would give the country highest marks for transparency in doing business.”

Citing WRB Energy’s decades-long experience in utility and renewable energy development in the Caribbean, Mr. Blenker noted that Content Solar is the culmination of three years of work to ensure that the project was well designed, well placed, and compatible with Jamaica. 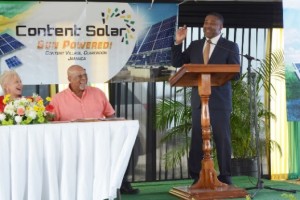 Both Andrew Wheatley, Minister of Science, Energy and Technology and Phillip Paulwell, Opposition Spokesman acknowledged the maturity of Jamaican governance shown by the seamless transition in the support for this important project. “I really want to commend us all for the tremendous way we run this place because Jamaica can’t progress if we have stop-starts whenever there is an election,” said Mr. Paulwell.

Minister Wheatley said, “Energy is something we cannot politicize. Growth of Jamaica’s industrial and manufacturing sectors demands more efficient, dependable supplies of lower-cost energy…Content Solar’s twenty megawatt plant offers the country long-term price stability and sets the stage for increased deployment of renewable energy in the future.” Minister Wheatley also indicated that he will start looking at requiring companies building renewable energy solutions to also install storage units for power. He stated, “We will have to ensure that as we develop the policy that storage is a critical component… and I am sure that as the technology evolves the cost of storage will go down.” The Official Opening and Ribbon Cutting Ceremony was also the final public speaking appearance by Kelly Tomblin, CEO of JPS. Ms. Tomblin who reminisced on her time in Jamaica, noted that while the Jamaica’s ‘soon come’ approach was a reality, this project confirmed that “when it was necessary Jamaica was capable of being best in class and showing execution excellence.” “This project is turning heads in Washington … it is being held up as an example to follow”, said Christian Redmer, the U.S. Embassy’s Political and Economic Counsellor in his remarks as the US Embassy Representative.

More than 150 people attended the opening which included representatives of local and international organizations involved in moving the project to completion, members of the environmental assessment team, Office of Utilities Regulations, other alternate energy partners and government and community representatives.

WRB has owned and operated electrical generation and utility assets in the Caribbean since the early 1980s and currently operates the public electric utility for the Caribbean nation of Grenada, where it provides fully integrated electrical services – power generation, distribution, metering, and billing – to tens of thousands of residents and businesses. WRB also operated the power systems in Grand Turk and Dominica. Based in Tampa, Florida, WRB has built a stable asset base and a well-capitalized organization with substantial interests in community banking. WRB is one of the largest shareholders in both the Bank of Tampa and Center State Banks, two of the largest independent banks in central Florida.

WRB Serra Capital Partners is a private equity fund that invests in renewable energy, energy efficiency, and water infrastructure in Latin America and the Caribbean, with projects ranging from early-stage construction to commercial operations. For more information: www.wrbserra.com.

We invest in sustainable infrastructure in Latin America and the Caribbean.